While there are plenty of innovative workforce tools – including state-of-the-art workforce management software – that can help you better run a company, there's no technological substitute for a strong leader. For a lucky few, leadership seems to come naturally, while some of us have absolutely no business being put in charge of other people. Others likely fall somewhere in between, possessing some leadership traits and lacking others. The good news for these people is that with hard work, leadership skills can be learned.

Great leaders understand that the buck stops with them. They have the responsibility to make the tough choices, and set a clear staffing plan. They know that there is little worse than a leader who is paralyzed by the prospect of making the wrong call.

Being decisive is not just about making decisions, however. It’s also about how you behave afterwards. Do you clearly explain the choices you make to your office-bound and mobile workforce? Do you hide behind vague language, in the hopes that your decision won’t upset anybody? Do you try to distance yourself from the decision, framing it as something that “happened,” rather than something that you executed?

When a boss does not confidently explain their decisions, employees’ trust in company management naturally erodes. Similarly, a leader who tries to deflect attention from his role in an unpopular decision will command even less respect from employees than one who owns the decisions he makes, since workers will view him as weak or even cowardly.

Decisiveness should not be confused, however, with dictatorial. Good decision-makers know how to depend on others to provide information and input. Sometimes their decision will be to have a trusted peer make the call. As Inc. Magazine puts it, strong leaders “know when not to act unilaterally but instead foster collaborative decision making.”

People are more inclined to follow somebody who they believe cares about them. A good leader shows employees that she is on their side, effectively manages them and views them as an essential part of the team.

Perhaps the most basic rule of showing workers that they matter to you is by getting to know them. While there are some situations where it's impractical, if not impossible, to personally meet every employee, a good leader will go out of their way to remember the names of all of the workers that they see throughout the day. Workforce tools, such as group chat apps, can also help bring teams together.

In interactions with employees, a strong leader will regularly convey appreciation for the hard work that they do, as well as the challenges they face in the course of that work. They make a point of thanking employees for their good work while respectfully giving advice on how to make improvements. They listen to concerns that employees voice, demonstrating through their words and body language that they are genuinely interested in what their subordinate is saying. 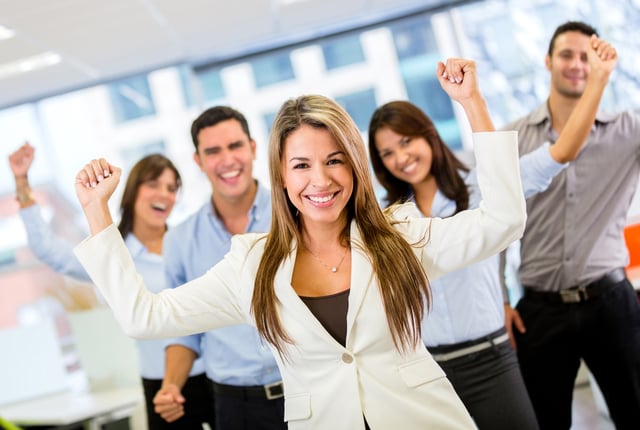 Ideally, leaders should be well-versed in all phases of how the company runs – and how it was managed before them. But they also need to be willing to consider different approaches, explore new ideas and buck conventions that have outlived their purpose.

Strong leaders in business are creative thinkers whose heads are overflowing with ideas about how to do things better. They don’t seek to simply maintain the status quo, but rather are eager to make their own imprint on a business.

However, good leaders are unlikely to get all of their ideas on their own. Instead, they seek them out, harnessing the thinking power of those around him. One of the keys to creative thinking is the ability to challenge your own assumptions and allow new ideas to reshape your views. Indeed, as an article in the Harvard Business Review noted, the trait that innovative CEOs are most likely to share is curiosity.

Workers are less likely to have confidence in somebody who is erratic, unpredictable and prone to big emotional swings. They want a leader who is steady and consistent in their behavior, reacting to events rationally. When trouble hits the company, a good leader doesn’t panic, point fingers or feel sorry for themselves. Instead, they get right to work figuring out how to resolve the problem, calmly assessing the facts and executing a plan based on sound reason.

Those who have trouble managing their anger may have trouble being effective leaders because of the damage their outbursts can inflict on workplace morale. If employees aren’t sure of what response they’ll get from their boss if they present them with a problem or question, they’ll often try to minimize their interactions with the leader or become difficult to manage, leaving the boss with less access to important information about what’s going on at the job site.

Stable leaders also help workers feel more secure in their jobs, which makes it easier to retain top-notch employees. When leaders are unpredictable, workers will often conclude that the behavior is a reflection of deeper problems at the company and that their jobs may not be safe. That’s when they start looking for an exit.

Of all the leadership tools, none are more critical than strong communication to ensure maximum workforce optimization. The best leaders seek to be in regular contact with as much of their workforce as is practically possible. They will schedule a team huddle, or check in regularly with managers and supervisors about how things are going so that they know as much as possible about what’s happening on the ground.

Just as important as the act of communicating with subordinates and colleagues is the way in which you do it. The most effective leaders are articulate and to-the-point. They ask good questions, pay attention to what they’re hearing and respond with incisive, confident feedback. To maximize the impact of their words, they keep meetings and conversations short and avoid pontificating.

Good leaders also use communication to inspire the workers they don’t interact with regularly. For instance, if you are the leader of a construction firm that employs thousands of mobile workers, you obviously won’t be able to regularly engage in face-to-face talks with those at the work sites. However, you can help them feel more connected to company leadership by communicating with them through emails, newsletters or other chatting apps that are becoming staples of successful project management.

No matter what level of workers you are interacting with, your goal should be to establish a connection based on mutual respect and trust. If you demonstrate, through your words and actions, that you respect and have faith in your workers, they will in turn respect you as a leader.