Getting a better understanding of how you and your on the clock employees spend time at work is one of the best ways to boost productivity. But even if you’re doing everything you can to maximize productivity on the job by tracking your time and pursuing effective time-management strategies, it’s likely that you and your employees are plagued by fatigue.

Granted, getting the sleep you need is often easier said than done. Even if professional and family obligations still leave you enough time to get the recommended eight hours of shut-eye, falling asleep and staying asleep is no easy feat for many of us.

No matter what your current sleep habits are, if you often find yourself feeling drowsy throughout the day, you should seriously consider taking steps to get more sleep. Here are some compelling facts about sleep as well as ways you can go about getting more of it.

We are suffering from sleep deprivation

A 2008 poll conducted by the National Sleep Foundation found that roughly half of American workers say that (at least several times a week) they wake up feeling unrefreshed from their night’s sleep. Forty-four percent say they experience a problem sleeping every night or nearly every night. Nearly a third of workers admit they have fallen asleep at work due to sleepiness! Half of workers say that their lack of sleep has impacted their ability to do their job.

The cost to business is huge

A Harvard study estimated that sleep deprivation costs U.S. businesses roughly $63 billion a year in lost productivity. Another study put the figure far higher –– $411 billion! Meanwhile, the National Center for Sleep Disorder Research estimates that the total financial toll of sleep deprivation in the United States runs between $50 billion and $100 billion a year when taking into account the myriad of health problems that lack of sleep causes, as well as the many thousands of tragic accidents, notably on our roadways.

Concentration is next to impossible

Even if your fatigue isn’t tempting you to put your head on the desk, it often makes it much harder for you to concentrate on challenging tasks or notice important details. Sleep-deprived workers become more easily distracted and get more frustrated by small setbacks or annoyances. In many instances, workers who are severely sleep deprived feel awake physically, but are completely out of it mentally, as their minds are hazy and wandering.

Similarly, sleep is key to maintaining a strong memory. When you’re tired, you’re much more likely to forget things, whether it’s a meeting that you scheduled a week ago or an email you remembered to send 10 minutes ago. 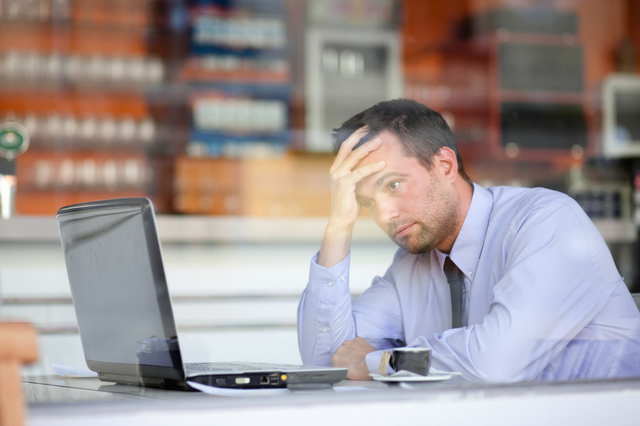 A consistent sleep schedule is paramount

According to the National Sleep Foundation, one of the keys to ensuring adequate sleep is by sticking to a regular sleep schedule. That means going to bed and getting up at the same time everyday, including on the weekends. If you stay up much later and sleep in on non-work days, it will often throw your internal clock off, making it hard for you to fall asleep at your weekday bedtime.

In the same vein, stay away from lengthy naps in the middle of the day. If you do feel your eyelids weighing down, a short power nap (less than 30 minutes) is the best solution. If you fall asleep for longer than that, you’re likely to wake up feeling groggy and you’ll likely have a tough time getting to sleep at night. That is particularly true if you’re taking a nap in the evening, after work. No matter how tempting it is to crash when you get home, try your best to resist bed until you’re ready to commit to a full night of slumber.

It’s a vicious cycle. You’re sleepy, so you don’t have the energy to work out. But then because you aren’t getting physical activity, it’s hard to get to sleep.

Break the cycle by forcing yourself to get in some daily exercise. What’s remarkable about exercise is how often it can actually leave you feeling more energized. Even though you have spent a large amount of energy taking a run, a swim or lifting weights, the endorphins the activity releases in your body gives you a boost. But more importantly, it puts your body in a much better position to fall asleep when the time comes.

Screens are no friend of the sandman

Experts strongly counsel to put your eyes on something besides your TV, computer or phone in the hour preceding bedtime. The blue light emitted by such devices inhibits your body from producing melatonin, the hormone that regulates your internal clock. If you can’t swing a full hour before hitting the hay, then try to at least make it 20-30 minutes. Reading, for instance, is a great way to help your body power down.

Caffeine is not a panacea

A cup of coffee or two in the morning is perfectly healthy. But when you find yourself leaning on caffeine to combat sleepiness in the afternoon, you should think about what is causing the PM crash in the first place. You’re probably not getting enough sleep, and your caffeine remedy may ironically be one of the main reasons. The Red Bull boost at 4 pm will make it harder for you to nod off six hours later.

You can expect your employees to work hard while on the clock and still not demand that their work come at the expense of their rest. If you want your workers to be as productive as possible, encourage them to get sleep. In addition to offering them information on the subject, try to offer them flexibility that ensures they get the rest they need. For instance, if you have employees working late one night, tell them to come in late the next day.

Another solution is allowing employees to take naps during the workday, either in a designated room with couches or beds, or even in their cars. Employers that have endorsed napping on the job include Uber, Google and PricewaterhouseCoopers.

Sleeping is as much about work as rest

Stop thinking of sleep as a luxury and start thinking about it as a critical business requirement. To put it another way, if your brain is your greatest asset in business, then doing whatever it takes to keep it in tip-top condition should be your highest priority. And the same goes for your workers: on the clock employees are most useful when productive, and every hour of sleep they lose makes them less so. Sleep isn't overrated – it's an essential element to business growth and success.

Allowing time for proper sleep is a key component in strong mental and physical health. Download our free eBook to find out more.

May 24, 2017in Employee ManagementBy Bob Drainville