Celebrating its 20th year in business, Masters Touch was founded to fill a niche for a high-quality home design and building service in Massachusetts. Owner Doug Masters uniquely assembled a dream team of experts in their respective fields – from architecture to construction and interior design – with the goal of providing clients with everything they need for home concept to completion. This one stop shop prides themselves on flawless communication and execution, earning Masters Touch an impressive fan base throughout New England. 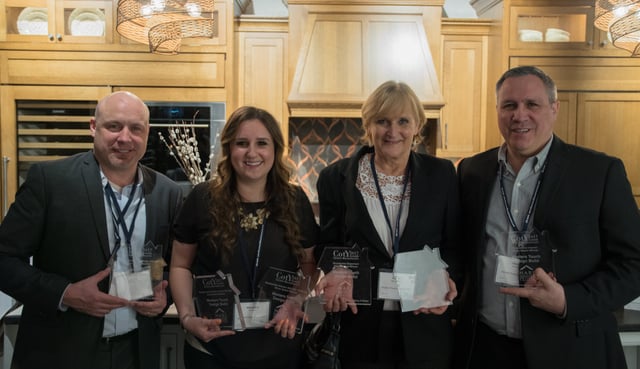 The blueprint for a better system

Like all savvy and successful business owners, Doug Masters knows that establishing trust not only with customers, but also with employees, is critical. As much as owners and managers want to believe that their employees are nothing but honest, human error is real and the honor system is flawed.

For Masters Touch, managing some 30 mobile employees, most of whom are working across jobsites in multiple states, is a tall order. Expecting that each worker is going to correctly record their locations and hours on their manual timecards each day is just about impossible.

Before being promoted to his current job as Construction Manager, Jacob Gadbois recalls working in the field in 2010 and experiencing this firsthand.

“We’d show up Monday morning on payroll day, look at our timesheets and attempt to remember what we did on the days we missed recording our hours. We weren’t trying to cheat. It’s human error … and it’s NEVER accurate.”

When Gadbois stepped into a management role, he made finding a web based timekeeping system his top priority. Timesheet Mobile, then in its early stages, provided a call-in IVR system that perfectly suited the needs of Masters Touch field employees. Gadbois explains, “Even without the app, it was still a massive upgrade from what we had been doing.”

For companies like Masters Touch, with an entire fleet deployed in jobsites across multiple cities and states, having

– where workers are never required to go to the home office to clock in for a job – saves time and money. Before Timesheet Mobile was implemented, Masters Touch employees were driving to the home office twice per month to drop off timecards, then driving an additional 20 minutes to the jobsite – all of which was on the clock.

Once the Timesheet Mobile smartphone app was launched, Gadbois introduced it to his employees and received an instantly favorable response.

“My team liked the app from the get-go … it makes their lives easier. I’ve never gotten any blowback on it … it’s a one touch punch system – as simple as it gets.”

Along with the user-friendliness of the app, Gadbois also pointed out how the functionality has increased the company’s efficiency, as it pertains to QuickBooks employee time tracking.

“We used to have someone manually entering handwritten timecards and it took a good eight hours every payroll Monday for her to do that. Integrating payroll into QuickBooks has now made it a 30 minute process.”

Now that their bookkeeper is spending less than an hour every two weeks using Timesheet Mobile's payroll timesheet software, she is free to deal with other important tasks. Gadbois jokes, “She no longer has to call around, trying to translate people’s handwriting!”

In addition to massive time savings, Masters Touch is experiencing substantial financial savings as well. Gadbois elaborates, “Alot of people were clocking in on their way to work and clocking out when they got home, and we were having that trouble even while using IVR, but with the GPS geofencing technology on the app, we can actually see where they clock in and clock out … which is saving us a significant amount of money. Just the on the clock employees knowing that we can see their punch location is a massive deterrent … we hardly ever have to check it anymore.”

In fact, since having implemented Timesheet Mobile's on the clock employee punch in system, Gadbois estimates that Masters Touch is saving $10,000 per month.

“I think if someone has as little as one field employee, it’s worth investing in Timesheet Mobile. The cost is minimal and the amount you save … and the amount of headaches you avoid … it’s more than worth it.”

“The problems that I've experienced have been fixed same day … and in a case where we needed custom fields, we got those within a week. This system is on auto-pilot for me. It just works. I’m happy.”